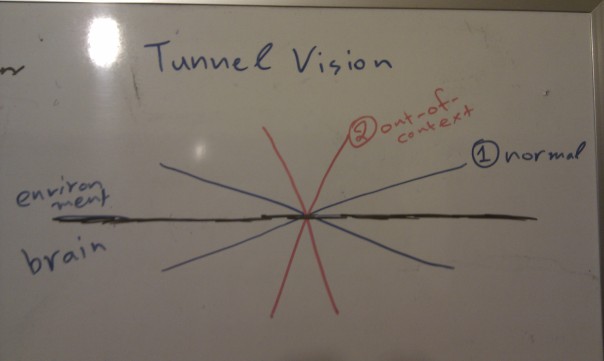 A simplistic depiction of how our brain adjusts to out-of-context experiences, focusing on that specific stimuli in order to achieve deeper traversal (for possibly better/quicker action/resolution).

Speed of perception and out-of-context experiences

This can be easily explained by the traversal speed of the inner loop! Let’s think a bit about it: when you see a pattern, some current from the battery is used to expand this signal through the inner loop and bring some more patterns in your mind. This traversal through the inner loop is limited by the speed of your neural impulses. This means that if the next pattern in the series arrives in your sensory area before you have managed to “guess” it through activation of patterns via the inner loop… this new signal will not be negated by the selector (because the selector does not have something from the inner loop to compare and subtract it with) and thus will enter your brain whole as an “out-of-context” experience.

And this is how it can seem as out-of-context for us something that we’re quite used to it, but at a significantly slower speed. Examples are many, like speaking a language much faster than normal, but the most characteristic one is: speeding with a car. The faster you go, the quick the new stimuli (of surrounding environment) arrive to your perception and thus the more out-of-context they appear and thus… exciting (or fearful, depending on whether the DPs will be positive or negative ones).

We need to find a methodology to increase the affinity of politicians with their electorate base, as well as their derivation of pleasure from non-financial sources.

After all, everybody in life is trying to maximize his pleasure, and that’s what politicians would do as well. The problem lies from the fact that serving the public should be exactly that: a public service profession. This means to subdue your own atomicity and put the welfare of the lot above your own. To make such decisions, it has to translate to some pleasure potential in the politician’s mind. And how can this be pleasurable?

We have to capitalize on the exact mechanism that nature uses for parents to love their children: we have to build some affinity (a.k.a. love) from the politicians towards the populace.

Politicians should be bred that way, instilled with ethos from early childhood and also taken care by the public so that they derive pleasure from it and thus have the capacity to give this goodness back. In this way, a strong bond (affinity) will be gradually built inside their mind, which will be a safeguard in their decision-making process later in their political career. Would a mother, even if left unattended/unsupervised, make a decision that will hurt her own child? Even if she was incentivized/bribed to make such a decision? The answer is no in both cases, for the simple reason that her mind projects the harm that will happen to her child by such a decision and through the affinity link it gets translated as something that will hurt herself!!

This, ideally, is the same mechanism we want to instill in the politicians! They should have such strong affinity with the populace that any decision to harm it would tunnel towards them and get translated in their mind as self-infliction.

Such a strong affinity cannot simply occur. It has to be elaborately built, piece by piece, and the state should design the politician’s path in a way that promotes such goals. After this happens, citizens will truly be free to trust their fate to the able hands of politicians, as a child welcomes a warm embrace from its mother.

Too idealistic for you? Nevertheless, the Theory says that it can happen.